Excerpts from the book “Odyssey of Life – Homage to Homer”

This book was conceived and planned in early 2021 out of enthusiasm for the art and culture of ancient Greece. Homer has inspired both archeologists and artists from antiquity to the present day. Today, the hill of Hisarlik in western Turkey is considered the actual site of the city of Troy described in his epics. It was the German archeologist Heinrich Schliemann (1822 – 1890) who finally discovered it, even though he initially took a wrong turn, accidentally destroying part of the place he longed so much to discover. To honor the English archeologist Frank Calvert, the monument of the Trojan Horse was erected at the former site of the British consulate. With a clever move, Schliemann got Calvert to hand over his excavation plans to him.

Conversations with the locals of Hisarlik also helped him find the site. Since he was a child, he had dreamed of discovering the places described by Homer. Like Odysseus, he travelled the world many times over. He studied Languages, Literature and Archeology in Paris, wrote academic best sellers, and was granted American citizenship, as well as several honorary and doctoral titles. In 1869, he married his second wife Sophia. This time, Schliemann had chosen a Greek woman, beautiful and gracious like Helen, who loved Homer as much as him and shared his excitement about his work. Thirty years his junior, the daughter of his Greek teacher became his patron goddess in Greece. The photograph showing her wearing the dazzling headdress from “Priam´s Treasure” made his Athena “immortal” and world-famous. What made Schliemann special was his uniquely emotional and spontaneous approach to Homer’s works. Together with medical scientist Rudolph Virchow and archeologist Wilhelm Dörpeld, he also developed an intuitive, logical approach to archeology, and eventually made significant contributions to literary science. Dörpeld continued Schliemann´s archeological work and, in 1893, excavated a sixth settlement in Hisarlik that dates back to the time between 1600 and 1200 B.C. and is thought to be identical with Homer’s Troy.

The legendary tale of archeologist Heinrich Schliemann took place during a time when many Germans were emigrating to America and Russia. Not only were Homer’s works his compass as he embarked upon his quest to find Troy, but his own life resembles a modern odyssey. Born in Neubukow, he grew up in the Northern German State of Mecklenburg. His father, an alcoholic with anger issues, served as a minister in the town of Ankershagen. Heinrich was raised by the educated family of his uncle. Fifty years earlier, J. H. Voß had translated Homer´s epics into German in Ankershagen. Homer´s world of gods may have impressed the minister´s son more than that of his irascible father. In the Odyssey, man makes his own decisions, even if the gods are sensitive and unwilling to accept criticism.

The young Schliemann wanted to become a famous scholar. For lack of money, however, he initially became a merchant’s apprentice and took English lessons. He went to work at the stock market in Hamburg and was offered a brilliant position in Columbia. Thus began Schliemann´s own “odyssey of life”: In late November 1841, the 19-year-old left the port of Hamburg on the three-master “Dorothea”, but the ship was hit by a storm, and his Columbian dream sank into the freezing waters of the North Sea. He was stranded on the Dutch island of Texel. Like Odysseus on the Pheacians´ island, the locals welcomed him with great hospitality. He then moved on to Amsterdam, and the great trading metropolis became the cornerstone of his success. He read foreign periodicals and significantly advanced his language skills employing a special autodidactic system. Thanks to his phenomenal memory, it took him no longer than six weeks to learn a language (towards the end of his life, he had mastered 19 of them).

In 1846, he went to St. Petersburg to trade various commodities. The Russian metropolis was a major trading hub between Europe and Asia. Schliemann´s business trips turned into study trips. Staying at the best hotels, he visited Europe´s great archeological collections and museums. On his way to America, he was shipwrecked once again. It took a second attempt before he made it to the other shore. As a partner to the Rothschilds, he helped buy and resell gold in Sacramento. The numerous immigrants loved doing business with the language genius. Schliemann returned to St. Petersburg a wealthy man and, in 1852, married his first wife in a Russian-Orthodox wedding ceremony. In the end, Schliemann was a multimillionaire, but what had happened to his childhood dreams? Once a compassionate son who sent home his savings, he had become a coldhearted entrepreneur. His marriage with Ekaterina failed. Schliemann longed for fame and learning. In the spring of 1866, he finally started a new life, first moving to Paris to study at the Sorbonne, and later relocating to Athens.

In 1873, towards the end of his first excavation campaign at the site of Troy, he made the sensational discovery of “Priam´s Treasure” and brought it to Greece. Although the authenticity of his find was repeatedly questioned, including by Germans, it was later moved to Berlin as a gesture of reconciliation with his native country, remindful of the way the Gods had exploited Odysseus´ homesickness on the island of Calypso. After WWII, the treasure was taken to Moscow and, upon closer examination, declared authentic. After undergoing surgery in Germany in 1890, Schliemann restlessly and prematurely left his sickbed and died in Naples on his way home. Another personal triumph was Schliemann´s discovery of the so-called “Mask of Agamemnon” in 1876 in Mycenae, along with other impressive golden treasures. With its Cyclopean walls and enticing Lion Gate, the fortified citadel of Mycenae is an Elysium for Homer fans. Shrouded in legend, the place allows visitors to feel the presence of Agamemnon, Iphigenia, Clytemnestra, Aegisthus, and Cassandra, and marvel at the Postern gate through which Orestes escaped after murdering his mother. Aeschylus, Euripides, and Sophocles whose great tragedies can be seen as links between Homer’s time and Classical Greece, may also have been there. The Treasury of Atreus and other beehive tombs featuring the famous triangle in their stone lintels are unique remnants of the Mycenaean Bronze Age.

The approach of looking at Homer’s mythical settings as real places can also be explained in psychological terms – stories of traumatic events tend to tell themselves. Thus, the Greek rhapsodists traveled from court to court passing on their adventure stories. The appearance of an exceptional poet finally turned folk tales into literature. Vowels had only recently been introduced to the Greek writing system. As Homer was blind, he is thought to have used dictation and scribes. Today, his name has become associated with the origins of occidental literature and a new level of storytelling, in which clever composition is used to create suspense. People have always turned to storytelling for therapeutic purposes. The Odyssey itself bears witness to the fact. If you visit Mycenae, depending on the season, you should consider wearing a large sun hat, and make sure to climb all the way to the top of the herb scented hill where the citadel stands. You can still make out the throne room (megaron) of the former royal dwelling. The round domos, a stone at the center of the room, surrounded by four columns, used to hold the hearth. The king’s throne stood across from it, in the order known from Homer’s descriptions, as well as the throne rooms of Pylos and Tiryns on the Peloponnese. Pylos is the place where Nestor is believed to have welcomed Odysseus´ son. Hypothetical reconstructions show murals in vibrant colors. Even the bathroom where, according to the legend, Telemachus was bathed and oiled, is still visible.

It was among the intrigues of the Palace of Mycenae that the Trojan War began. This location stands in stark contrast, not only to the Palace of Ithaca, where Penelope spent 20 years waiting for her beloved husband, but especially to the dream island of the Phaeacians (see: palace description by Alkinoos: Od. VIII, Verses 82 – 102). The latter is a nodal point in the Odyssey. Surrounded by stable and peaceful circumstances, Odysseus is welcomed with great hospitality and able to talk about his eventful journey without danger. He receives many gifts and is lulled into a deep sleep, only to wake up at home. Was it all a dream? Even at home, the struggle of life continues. The story centers on the theme of trust and the idea that – amid all the cunning and deceit among men – at least our closest family deserve honesty. Homer’s great literary humanism shows in his appeal to the reader to think about this message. For in Mycenae, where the human need for trust was so hurtfully disregarded, the end is silence.

Iphigenia as a Symbol of Peace

Can humanity, scholarship, and art overcome the horrors of this world?

“I often hear people philosophize over the sixth verse in the song of the fates.
In my opinion, the heart of every guileless listener should soften,
and his eyes tear up, as soon as the key changes to major;
only then, all the sorrow of humanity gets through to him…”

In the famous “Song of the Fates” in Act IV of Goethe’s play “Iphigenia in Tauris”, Iphigenia questions the morality of human sacrifice. We must not forget that, in spite of his archeological accomplishments, Heinrich Schliemann must also be seen as a kind of modern Odysseus who, as he searched for Troy, had to look at himself in the mirror before, with the help of scholarship and art, he eventually succeeded in finding himself. His economic involvement in the Crimean War (1853 – 1856) as a wholesale merchant (commodities trader), and the unbridled pursuit of material wealth that motivated it are especially questionable in moral terms.

In the poem set to music by the famous romantic composer Johannes Brahms, Iphigenia recalls a song from her childhood days. Goethe wrote the play based on the Greek dramatist Euripides` work  “Iphigenia in Aulis”  to welcome the first child of the duchess of Saxe-Weimar-Eisenach into the world. As a minister in the progressive duchy of Saxe-Weimar, Goethe enjoyed a lot of freedom to realize his humanist ideals. Homer and the poets of classical antiquity were important models for Weimar Classicism. Their work was seen as an epitome of humanity`s triumph over evil.

With her rational approach, faith in humanity, sense of responsibility, thoughtfulness, open-mindedness, and virtue, Iphigenia emerged victorious in her quest for peace and freedom. In Tauris, where humans were once sacrificed to Diana (Artemis), she created a safe haven for strangers instead. As a classical hero, she carried in her the serenity and tranquility the archeologist and art critic Johann Winckelmann Goethe admired so much had described as a characteristic feature of classical sculpture. It was in his footsteps that Goethe had travelled to Italy and written the famous play. 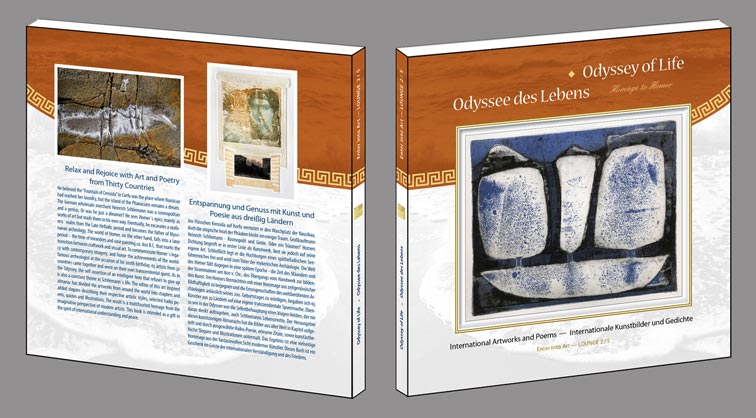 Five sail boats immersed
In the luster of bronze light
As evening descends.

Oh, beautiful blue
Sea, forget the suffering.
Carry me away.

In quiet alleys
A man´s voice telling stories
About the rough wind.