It is perhaps no coincidence that artists and writers often lose their hearts to cats. Moreover, they tend to view their freedom-loving, four-legged friends with a degree of envy and respect. According to Mark Twain, “Of all God’s creatures there is only one that cannot be made the slave of the leash. That one is the cat.”. Although the work of famous artists and writers plays no part in this book, the Japanese artist Chiemi Itoi and the German haiku poet Gabriele Walter have been inspired by their shared love of cats. In collaboration with graphic artist and designer Kurt Ries, they have created an imaginative and stylish gift book.

Leaf through the book!

Poets and artists, as well as cats, are mostly night owls, only coming alive when they seek their needed rest from the burdens of the world in the form of spiritual creativity. This book is not about the well-groomed kittens of elderly ladies.

Emil Zola also loved the “vagabonds of the gutter,” whilst Ernest Hemingway’s legendary felines were still masters of his house sixty years after his death. According to Leonardo da Vinci, “the smallest cat is a masterpiece,” which may explain why Pablo Picasso and Andy Warhol both loved this creature.

In ancient Egypt, the velvet paws were treated with sublime veneration as objects of worship. As a daughter of the sun god, Ra, the cat goddess Bastet was also worshiped as a goddess of fertility and joy.

The book also serves as an exhibition catalog for the solo exhibition and online event of Chiemi Itoi in June 2017 in the Studio Gallery “ART RETREAT” in Bonn-Königswinter.

You can bye the book via Amazon and in other Internet stores or in the book trade: 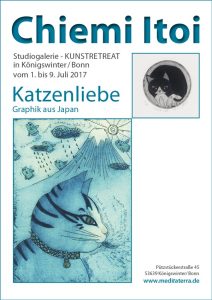